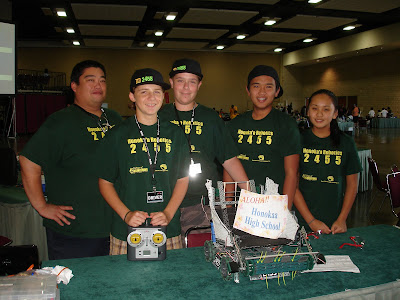 Congratulations to the Honoka'a VEX Robotics team which qualified for the VEX Robotics World Championship next year in Dallas, Texas. The 4th seed alliance which included Honoka'a, Waiakea High, and McKinley High took second place at the VEX Pan Pacific Championship this past weekend being edged out by the Second Seed Alliance. The Pan Pacific Tournament involved nearly 1000 students forming 86 teams from 48 schools over the two day event.
.
Honoka'a is one of four teams from the tournament which now qualify for the VEX Robotics World Championship which will be held at the Dallas Convention Center on April 22-24, 2010. At the World Championship, the team will have the opportunity to challenge their top-ranked peers from other countries around the world, including teams from the Asian Robotics League, South American and Europe. Other Hawaii teams qualifying include Waiakea High School, McKinley High School, and Pearl Highlands Intermediate.

Honoka'a High School's robot also received the Judge's Award at the tournament.
Posted by Mark at 11:02 AM