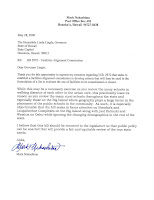 I have drafted a letter to Governor Lingle asking that she veto HB 2972 that seeks to establish a facilities alignment commission to develop criteria that will be used in the formulation of a list to evaluate the use of school facilities to be consolidated or closed.
I do not believe that it is necessarily wrong to focus on eliminating government duplication or to close unnecessary facilities, however this bill as it has emerged from the House Senate Conference Committee would seemingly select only seven complexes state wide for consideration, of which three of those listed -- Hilo, Laupahoehoe and Honoka'a are all concentrated in the first house district. I believe that it is bad policy to prescribe and focus the efforts of a commission so as to pre-determine the desired outcome without a fair weighing of all of the facts and figures statewide.
I believe that this bill will emerge once again from the legislature and if elected, I will work with my colleagues to craft a bill that is sensitive to the needs of the First House District and will propose that schools will need to be at least 5 miles from any neighboring DOE school in order to be considered for closure.
Posted by Mark at 11:30 AM No comments: