President/CEO and owner of House of Finance in Honolulu is the 2008 Honoree this evening. This recognition by the Hawaii Senate Oldtimers is a celebration of the organization and those who have contributed to their communities through their work in other organizations and individually.

As 1981 Chapter President of the Oahu Filipino Jaycees, Roland guided the creation of the Miss Sapangita Pageant which became a signature project of the Oahu Filipino Jaycees and served as a source of enrichment and pride in the local Filipino community. Roland’s community efforts continue till today as he has been instrumental in raising over $14.5 million to realize the development and construction of the Filipino Community Center in Waipahu, Hawaii. Roland now serves as President Emeritus for life as Founder of the center that opened in 2002. For his work, the center’s ballroom is named in his honor.

Roland is married to his wife Evelyn who also works in the family business. They have four children Matthew (Yuka), Clarice, Chanel, and Celine. Matthew and his wife Yuka also made Roland a proud grandpa with baby Kenshin Masaru Casamina who will be turning one shortly after honoring grandpa. 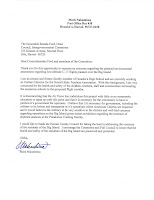 The C-17 training route over the Big Island for which a Environmental Impact Statement is being developed highlights the need for greater public notice and education by our government. While the Air Force has argued that currently training flights have been unrestricted and have involved a large area of the Big Island, I personally have not seen them. I believe that the public has a right to know exactly what impacts these proposals would have and to "see for ourselves" exactly what it is we are talking about before we are required to make a decision regarding it's pros and cons.


I commend the Hawaii County Council for taking the lead in preserving the health and safety of our Big Island communities.
Posted by Mark at 7:49 AM No comments: