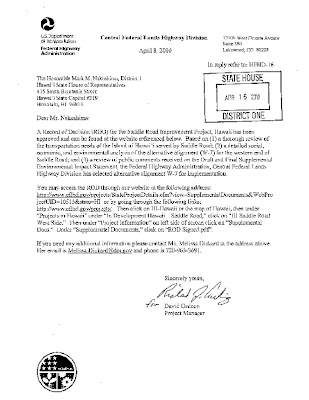 The Record of Decision for the Saddle Road Project has been approved and is available for viewing on the Federal Highway Administration website.
http://www.cflhd.gov/projects/StateProjectDetails.cfm?view=SupplementalDocuments&WebProjectUID=10513&state=HI
Posted by Mark at 12:44 PM 5 comments: 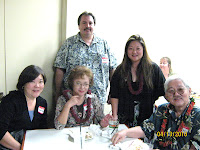 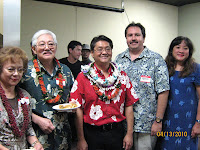 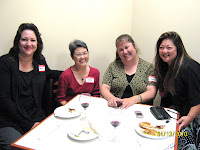 The Friends of Mark Nakashima held a gathering in Honolulu in conjunction with the on-going legislative session. There was a nice crowd at the Hukilau Restaurant in the Executive Center who enjoyed a neo-Chinese faire. Restaurant Manager Ken Takahashi, originally from the Big Island was a school buddy of Mark's from intermediate school days.
(Top) l-r: Carol Taniguchi, Mark's Mom Betty, Cousin Patrick Nakashima, Sister Sandra Jakob and Dad Earl.
(Middle) l-r: Mom, Dad, Mark, Cousin Patrick and his wife Gail.
(Bottom) Sandra and friends. 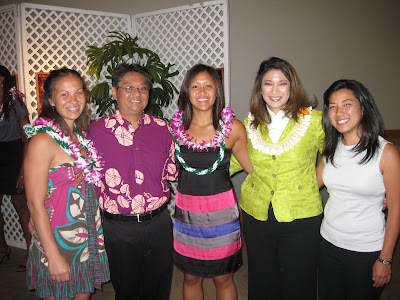 The University of Hawaii Wahine Basketball program recently wrapped-up the season with an end of year banquet at the Ala Moana Hotel. The lone award handed out was the annual Ah Chew Goo award which went to junior and Honoka'a Alum Keisha Kanekoa. The award was presented by former Wahine Coach Vince Goo.
Mark has supported the Rainbow Wahine for a number of years and is pictured with Leilani Galdones, Keisha Kanekoa, Coach Dana Takahara-Dias, and Linda Ichiyama.
Posted by Mark at 11:59 PM No comments: 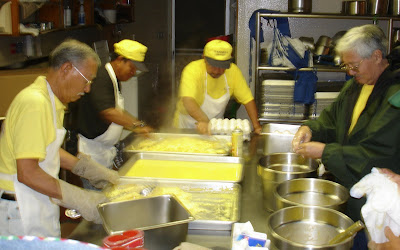 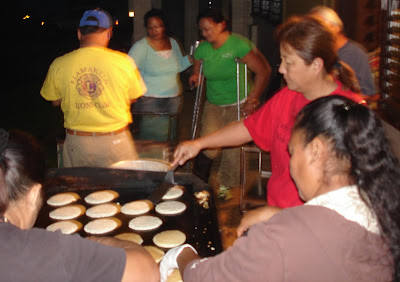 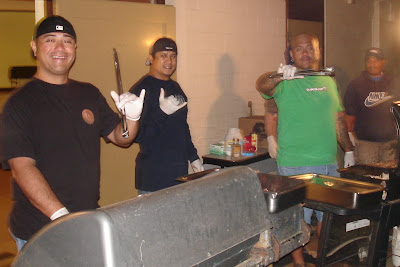 Members and volunteers at the Hamakua Lion's Club annual pancake breakfast get an early morning start as they prepare eggs, pancakes and meats to serve for the hundreds of hungry patrons who will be filing through the doors at the Honoka'a School Cafeteria.
Posted by Mark at 1:02 PM No comments:

Members of the United Public Workers meet with Mark regarding their concerns for the proposed closure of a module at Halawa Correctional Facility. The Senate version of the budget would cut $7 million from the Halawa Correctional facility and force 240 prisoners into mainland facilities.

As a member of the House Public Safety Committee, I have supported efforts to bring our prisoners home and to stop sending millions of dollars out of state where it is not supporting or growing our local economy. While there is a short-term cost savings of about $30 a day per prisoner, I believe that this is money that is being removed from our economy and will result in long term negative impact on our state.
Posted by Mark at 11:01 AM No comments: