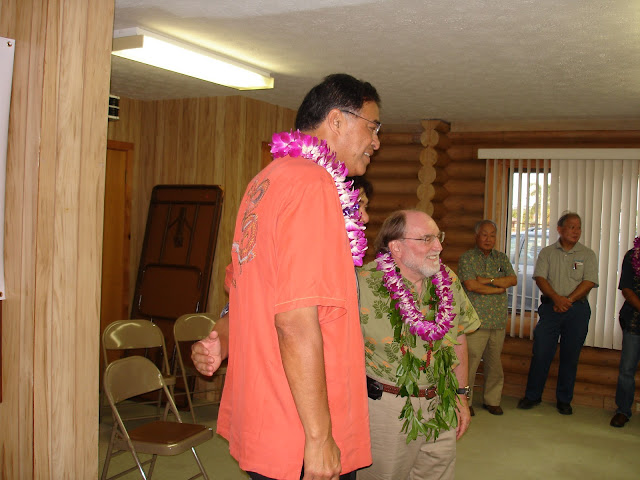 Neil Abercombie and Mufi Hanneman stand for pictures at the Democratic Unity event held at the UPW Headquarters in Hilo.  Mufi pledged his support for Neil and Neil told the crowd that he would work to earn the support and trust of Mufi supporters.
Posted by Mark at 10:48 PM No comments:

The Pacific Basin Agricultural Research Center (PBARC) recently hosted two visitors from the Potomac League as part of their "Zero Waste" initiative.  In brief, the goal is to identify an algae in Hawaii that will be able to consume agricultural waste.  This will allow what would otherwise be a burden on farmers to be turned into an additional profit stream that would supplement farm income.  A secondary benefit from this process will be harvesting the algae and using it to develop bio-fuels and possibly a feed.
Posted by Mark at 10:38 PM No comments: 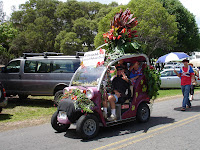 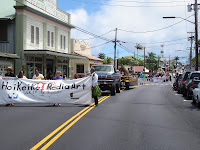 This was the fourth year that the festival was held in Honoka'a and featured peace themed movies, speakers and displays.  Stores and business also were decorated with doves and "peace" mobiles in celebration of the festivities.

Peace Festival Chair Miles Okamura was also awarded the 2010 "Distinguished Peacemaker of the Year" at a special presentation at the Peace Day Banquet on Oahu. 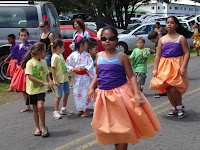 The Festival is tied to the United Nations Day of Peace which is held annually on September 21st and was successfully lobbied at the State Legislature by the Hongwanji's Young Buddhist Association.
Posted by Mark at 9:59 PM No comments:

Candidates are seated at the Mooheau Park Band Stand for the Democratic Party Primary Election Rally in Hilo.  Most notable were speeches by Mufi Hanneman and Neil Abercrombie that called for party unity regardless of what happened at tomorrow's election.
Posted by Mark at 10:47 PM No comments: 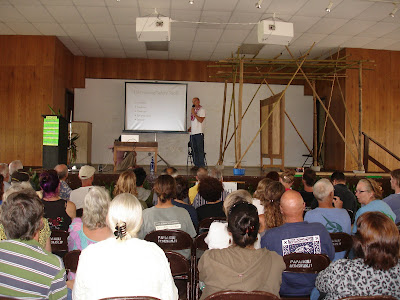 A packed audience listens to Bobby Grimes -- a resident of Paauilo Mauka -- talked about bamboo construction and joinery techniques, safe harvesting practices, and dealing with large timber bamboos. The talk was part of the 11th Annual Bamboo Festival held at Papaikou Hongwanji today.

The Hawaii Bamboo Society hosted the festival that featured exhibits, demonstrations, sale of numerous bamboo varieties, concessions and a silent auction. The group is the Hawaii Chapter of the American Bamboo Society which seeks to provide a source of information on the identification, propagation, utilization, culture and appreciation of bamboos.
Posted by Mark at 8:27 PM No comments:

The retaining wall located at the makai-Hilo corner of the Honoka'a High School Campus is finally complete.  Damaged during the 2006 earthquake, the wall which existed for years surname to the earth's rumbling that caused much damage in North Hawaii. 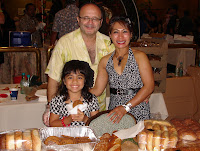 The 15th annual "Taste of the Hawaiian Range" was held at the Hilton Hawaiian Village on Friday. The event, a fundraiser for the College of Tropical Agriculture and Human Resources was founded by Milton Yamasaki and the staff of the Mealani Research Station in Waimea. According to the event website, over the past 15 years -- Mealani's Taste of the Hawaiian Range continues to share the importance of creating a Big Island livestockproduction system that is economically, ecologically and socially sustainable. It markets local products by hooking up producers with users, such as chefs ad consumers. The Taste also enables producers to get instant product feedback and network with other industry members. 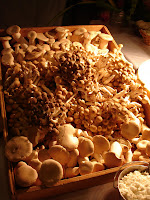 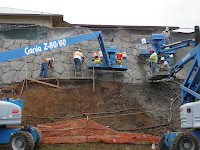 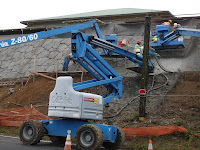 The large stone wall marking the Makai-Hilo boundary of the Honoka'a High School Campus has been unstable since the October, 2006 earthquake that caused much damage in North Hawaii. A portion of the wall running mauka-makai gave away during the quake and has remained unrepaired for the past four years. Finishing touches were made to the concrete wall by adding the appearance of a rock wall finish made of concrete which marks completion of that phase of the project that began several months ago.
Posted by Mark at 4:59 AM No comments:

Another Beautiful Day on the Big Island 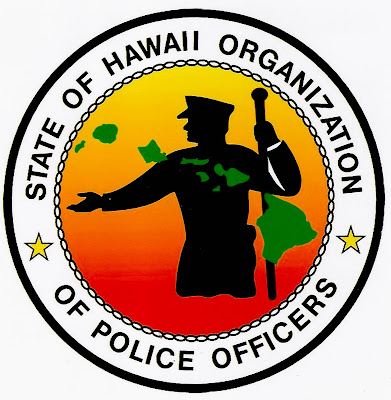 I am pleased to accept the endorsement of the State of Hawaii Organization of Police Officers (SHOPO). I am pleased to be recognized by the men and women who put their lives on the line every day to make sure that our families and communities are safe and secure. On a daily basis, these officers are performing important work not just solving cases and preventing crime, but working to maintain our communities. They are our neighbors, friends, volunteers, and family.
Posted by Mark at 4:15 PM No comments: 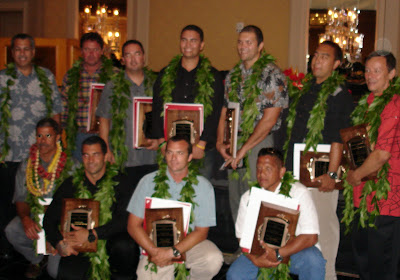 The Daniel R. Sayre Memorial Foundation is dedicated to providing essential life-saving equipment and training needed by Hawaii Fire Department here on the Big Island of Hawaii. The Foundation was started then years ago by Dr. Frank Sayre and Laura Mallery-Sayre when they lost their son Danny in a hiking accident and experienced first-hand the heroism and perilous nature of the work that the Hawaii Fire Department experiences on a regular basis. At the time, the Fire Department did not have rappelling ropes long enough to reach the bottom of the valley, so Hawaii Fire Department personnel took their helicopter down into Polulu Valley at great personal risk. Pictured above are members of the Hawaii County Fire Department who were involved in an ocean rescue and a incident off Kohala Mountain Road who were the 2010 Award Recipients.
Posted by Mark at 8:42 AM No comments: 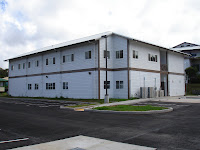 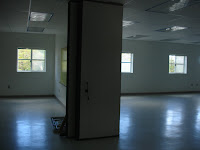 Phase 2-B of the North Hawaii Education and Research Center is nearly complete and occupancy for the new wing is expected by November 1, 2010. The project which enclosed the bottom floor of Phase 2 and included the addition of a new parking lot and photovoltaic panels on the Phase 1 roof adds new program space for the anticipated heritage center and the Hamakua ADRC (Adult and Disabled Resource Center). Low bids on the project made possible the addition of a pavilion that will be erected on the Makai-Waipio side of the property and will provide an additional resource for use at the facility.
Posted by Mark at 7:15 PM No comments:

Thursday was a busy day with meetings regarding the North-Hilo Hamakua Coop, Hamakua Ditch, and the Hamakua Elder Care Project were all held via video conference at the North Hawaii Education and Research Center. The presence of NHERC in our community provides another excellent resource for our community to meet face to face -- via video conferencing -- with people on the island, in the state, or around the world without the need for extensive travel time. In the case of these meetings, it also allowed for the participation by staff and state officials without the need to incur expensive airfares and the loss of productivity by avoiding the need for inter-island travel.
Posted by Mark at 7:24 PM No comments: