Last night, I participated a candidate forum sponsored by the North Hilo Community Association at the Laupahoehoe High School band room. The forum provided attendees the opportunity to ask questions of myself and my republican opponent Steve Offenbaker. Topics covered included: Jobs and the Economy; Education; Health Care; and Con-Con.

Jobs and the Economy

Because of our desire to maintain the rural character of the First House District, it is incumbent on us to promote agricultural industries and diversified agriculture ventures. Toward this end I propose a change in public policy that would give preference to locally produced agricultural products by state departments and agencies creating a viable market for a sustained agricultural sector. I would also explore the opportunity to create a excise tax exemption for the purchase of locally grown agricultural produce.

The issue of industrial zoning existing near residential areas is a result of our rich plantation history in which worker camps were built in close proximity to the sugar mills. As these areas are seeing revitalization for the first time in decades, new industries such as bio-mass energy plants and timber processing ventures are moving into these industrial-zoned lands next to unsuspecting neighbors. It is critical that these industries work to be good neighbors with the residents of the area and work to alleviate fears and adequately address concerns if they are to garner necessary the goodwill to succeed.

The Department of Education is not responsive or accountable to the concerns of local school communities -- students, parents and teachers. I would propose to eliminate the statewide management of the schools replacing this with district superintendents in each county -- appointed by the Board of Education -- who are directly responsible and accountable for the schools under their direction. This would replace the currently system of political appointment of Complex Area Superintendents by the state superintendent.

I also propose empowering School Community Councils to allow them to hire and evaluate principals as well as provide community oversight of school budgeting and expenditure.

The Legislature must address the concerns of the medical community with regard to medical liability and tort reform. Many doctors have identified this as the single greatest factor in opening or maintaining a practice in Hawaii.

We must pursue the release of funds to allow for the creating of a medical residency program through the University of Hawaii John A. Burns School of Medicine to allow for a neighbor island setting in which doctors may begin their careers and begin a practice.

The issues of timeliness and adequacy of medical insurance reimbursements would seem to cut across both the public and private sector. As such, a legislative work group including representatives of the public and private sector, insurance providers, federal regulators and other stakeholders must be convened to address these problems and propose appropriate legislation to resolve them.

The voters will ultimately decide if a constitutional convention should be held. Once that is done, the legislature will have to determine the timeline and logistics for this to occur with delegates being selected no later than the general election in 2010. Any amendments to the constitution would then appear on the next general election ballot, most likely in 2012.

This covers the highlights of issues brought forward. Please let me know if there are other concerns you would like me to address.
Posted by Mark at 3:39 PM No comments:

It Takes Teamwork I 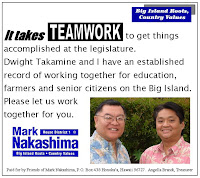 Working for and with Representative Dwight Takamine for the last 20 years has been a wonderful learning experience. As a member of Dwight's legislative staff and on various committees and work groups that he has assembled over the years has provided great insight into the importance of community organizing and teamwork. I believe that working together in partnership in the House and Senate will bring synergy to our efforts for even greater benefits to the First District.
Posted by Mark at 5:20 AM No comments: 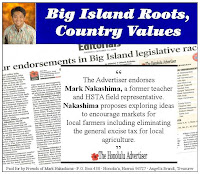 I am pleased to have been selected by the Honolulu Advertiser for their endorsement in House District 1 (Rural South Hilo, North Hilo, Hamakua, North Kohala).

"Nakashima proposes exploring ideas to encourage markets for local farmers, including eliminating the general excise tax for local agriculture. He wants more incentives for residents to use renewable energy sources and supports another look at tort reform in the Legislature as well as a task force to address the issue of physician reimbursements."

Follow the link below to see the whole story.

I am pleased to have received the endorsement of the National Association of Social Workers (NASW), Hawaii Chapter. The decision to endorse my candidacy was based on my commitment to the well-being of individuals, families and communities. The criteria included among others:

Toward these ends, I am very concerned about the many end of life issues that the elderly and families must face in caring for their loved-ones. With out the proper planning, long-term care of the elderly can have devastating impact on families and a live-time of savings and prosperity.

I also believe that in tough economic times, resources must be maintained or increased in the area of health and human services to insure that programs are in place to address the increased hardship on our most vulnerable populations.
Posted by Mark at 5:29 AM No comments: