Gary Washburn is a highly merited educator and gifted musician who is committed to the next generation of instrumentalists.  he was born to be a performer and parlayed his experiences into becoming a guiding force behind a very successful high school band program.  Mr. Washburn continues to motivate his students through life lessons that continue well beyond the classroom walls.

I first met Mr. Washburn when he was hired at Honoka'a High a few days into the school year in 1978.  It was my first year at Honoka'a also, and I found myself in the re-constituted concert band class that had been dismantled when the previous band teacher sought other employment as school enrolment put music on the chopping block.  Mr. Washburn was not quite the marching band type, but he took us on a band trip to Maui that first year as our rag-tag little group marched in the Maui County Fair parade.  Thus bagan a career in Honoka'a that would grow to become legendary.

Mr. Washburn re-created a music program that capitalized on his forte and under his tutelage, the Honoka'a Jazz band has performed multi-concert tours on Oahu annually to celebrate National Jazz Appreciation month, released several CDs, won won a National Association of Music Merchants award, appeared on National Public Radio's From the Top, and was one of thirty-six schools chosen nationwide as a Grammy Signature School.

In 2011, Mr. Washburn received the National Society of High School Scholars's Claes Nobel Educator of Distinction Award.  Yesterday, the Honpa Hongwanji of Hawaii inducted Mr. Washburn as a Living Treasure of Hawaii recognizing his contributions to Hawai'i's rich cultural heritage devoted to preserving the spirit, traditions and values of our island home for future generations.
Posted by Mark at 11:39 AM No comments:

Hilo Dorms on Track to Completion 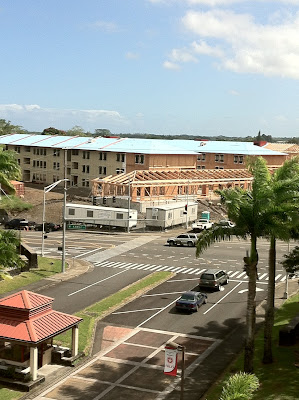 Eight months following groundbreaking ceremonies, the University Village Phase I project is progressing quickly and is scheduled to open later this summer for the beginning of the 2013 Fall Semester.

The project is located on 33 acres fronting the University of Hawaii Hilo's main entrance on Kawaili Street and will feature 300 student housing units in apartments and suite-style residence halls.

These new units will be the first to be added to the campus since 1989, and are being financed by $32 million appropriation by the legislature.  The Hilo campus has just 600 housing units on campus and services in excess of 4,100 students.