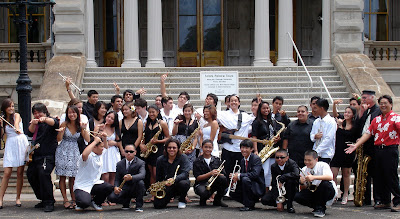 The Honoka'a High School Jazz Band Celebrated National Jazz Month with a series of gigs around the Island of O'ahu including a stop at I'olani Palace.  The Band played on the grounds of I'olani Palace just prior to the weekly concert by the Royal Hawaiian Band.

The Honoka'a Band was just recently recognized as a "Grammy Signature School."  The award created in 1998 recognizes top US public high schools that are making outstanding commitments to music education during an academic school year.  The award, which features a mounted Grammy - along with a check for $5,500.
Posted by Mark at 10:09 PM No comments: