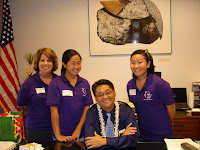 Visit by Honoka'a Dragons Lyla Mah and Danica Tamaye accompanied by Advisor Angela Brandt. The Dragons were visiting the Capitol in conjunction with the American Cancer Society efforts to raise awareness of cervical cancer.
Posted by Mark at 10:05 AM No comments: 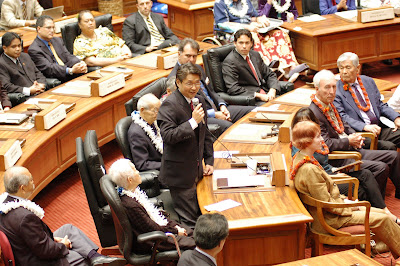 Representative Mark Nakashima stands to acknowledge Former Representative and State Senator Stanley Hara.
"Stanley I. Hara was one of numerous authors who helped to draft, edit, write and publish the first chapter of the story of the State of Hawaii.

Mr. Hara, who represented my district on the Big Island, was elected to the territorial House in 1954. As a freshman to the Legislature, Mr. Hara, a Big Island Democrat, helped to transform the educational system by passing legislation that made education available to all, including the disadvantaged. Before lawmakers restructured the educational system, the Territory of Hawaii only required free education up to the eighth grade level and high school students had to rent their books and pay other school fees.

During the 1959 special sessions, and the 1960 budget session and special session, which essentially shaped the future of Hawaii, Mr. Hara served as chairman of the Finance committee. Concerns that year included reviewing the areas of economic development on the neighbor islands, transition and reorganization issues, and budget threats to the health, safety and welfare of Hawaii citizens. It was necessary for lawmakers that year to draft legislation which addressed fiscal problems related to the transition from territory to state.

Mr. Hara played an integral part in shaping the State of Hawaii through urgent legislation and worked across party lines to create the foundation upon which Hawaii's government and laws now lie.

In 1968, Mr. Hara became a delegate to the Constitutional Convention, and then on January 14, 1969, he was appointed by Governor John A. Burns to fill the unexpired term of Senator Nelson K. Doi.

Please join me in recognizing Mr. Stanley I. Hara, his wife Diane Hara and their son Judge Glenn Hara." 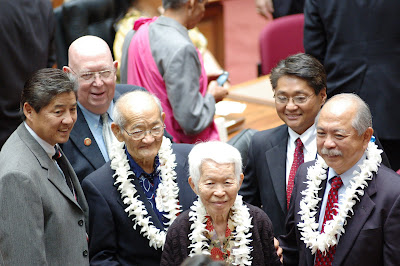 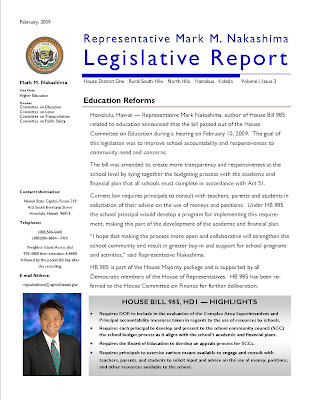