HONOLULU – Waialua High, McKinley High and Kealakehe High School robotics teams won this year’s FIRST in Hawai‘i Regional Robotics Competition, qualifying them to move on to the 2011 FIRST Robotics Championship at the Edward Jones Dome in St. Louis, Missouri, April 27-30. In all, six teams from Hawai‘i schools have secured spots in the international championship, ensuring the Aloha State will be well represented in the prestigious competition dubbed the “Super Bowl of Smarts.”

After an exciting weekend of competition, including 55 qualifying matches and a high-energy finals bracket match-up of the top 24 teams, six Hawai‘i teams battled for the championship title including a three-team alliance of Baldwin, Waiakea and Lahainaluna High Schools and an opposing alliance of Waialua, McKinley and Kealakehe High Schools. In a best two-of-three match, the Waialua, McKinley and Kealakehe alliance won in the third match.
Posted by Mark at 6:29 PM No comments:

"Fifty years ago this month, having won the war and secured the peace almost a generation prior, American youth coming of age were full of optimism, hope, exploration, experimentation and love. In this charged climate on the steps of the Michigan Union, a bold new experiment in public service was launched. The assembled students heard the future President of the United States issue a challenge: how many of them, John Kennedy asked, would be willing to serve their country and the cause of peace by living and working in the developing world?

Following his election, President John F. Kennedy in March, 1961, signed an Executive Order establishing the Peace Corps, forever changing the way America sees the world and the world sees us. Today, one of President Kennedy's most enduring legacies can be found in the over 200,000 current and returned Peace Corps Volunteers and the people of 139 host countries. March is Peace Corp Month and on this 50th anniversary, the United States Peace Corps remains an enduring symbol of our Nation's commitment to encouraging progress, creating opportunity, and fostering mutual respect and understanding throughout the world.

In Hawaii, the Hilo College Center for Cross-Cultural Training and Research designed one of the first Peace Corp training centers, with its field station in Waipi‘o Valley. In the valley, trainees spent one to three weeks experiencing the challenges of rustic living and became immersed in the cultures they would serve. The rest of their training occurred in the many plantation camps that dotted the Hamakua Coast -- Pepeekeo, Honomu, and Honohina among them.

On this anniversary, we honor the men and women from across the country who have carried forward our Nation's finest tradition of service, and we rededicate ourselves to fulfilling the dream and continuing the work of all those who aspire and yearn for peace."
Posted by Mark at 6:46 PM No comments:

After what seems like a long time in coming, a ground breaking ceremony was held at the site on the new Hawaii Community College Palamanui Campus.  Located north of the Kona International Airport, the campus will provide a permanent site for higher educational services in the West Hawaii area.  When completed, the campus will replace temporary facilities located in Captain Cook and will allow for the expansion of course offerings to the greater West Hawaii area.
The initial complex will include two classroom building and will be completed by the Palamanui Development Partnership as part of their community benefit package.
Posted by Mark at 10:10 PM No comments:

I invited Richel Cole, a senior at Sacred Hearts Academy to present the opening invocation to the State of Hawaii House of Representatives on March 16, 2011.  Mark met Richel when she delivered a keynote address at a conference sponsored by Enterprise Honolulu this past summer.

Richel told a story about how she was spurred into action by a young girl who did not think that she could go to college.  Taking the initiative, Richel founded the YWCA Youth Network that now provides encouragement young women to continue their education beyond high school.
Posted by Mark at 4:39 PM No comments:

The 2001 Big City Tour saw the Honoka'a High School Jazz band play numerous Oahu venues including Dot's in Wahiawa and the grounds of the Iolani Palace as they celebrated National Jazz Month in April.

Gary Washburn, Honokaa High music teacher and bandleader, called the award "the biggest recognition that we've attracted." That's saying a lot. Last year, the school's music program was recognized by the National Association of Music Merchants and the jazz band was featured on National Public Radio's "From the Top" program. And this year, Washburn received the Claes Nobel Educator of Distinction Award from the National Society of High School Scholars Jazz.
Posted by Mark at 7:56 PM No comments: 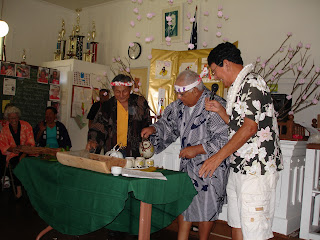 The Kohala Senior Citizens keep things interesting as they perform skits mixed in with bingo games and door prizes that always keep participants wondering what to expect next.  Above, Japanese Tea Masters use special water from Kohala Ditch to brew a secret "o-cha" in celebration of Girl's Day.
Posted by Mark at 10:56 AM No comments: