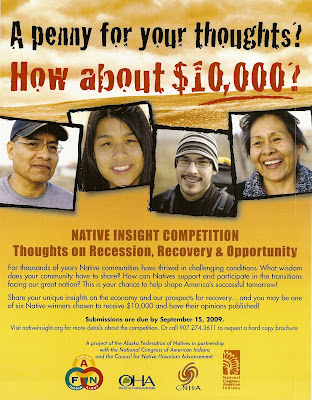 For thousands of years, Native communities have thrived in challenging conditions. What wisdom does your community have to share? How can Natives support and participate in the transitions facing our great nation? This is your chance to help shape America's successful tomorrow!

Share your unique insights on the economy and our prospects for recovery...and you may be one of six Native winners chosen to receive $10,000 and have their opinions published!

Submit your 500-1,600 word original written work by September 15, 2009 to compete. Go to
www/nativeinsight.org for more information.
Posted by Mark at 2:24 PM No comments:

The Nuclear Regulatory Commission (NRC) hosted a meeting to inform the public about the process for participation in the license request by the US Army to process and manage "residual quantities of depleted uranium (DU) at Pohakuloa and other Army installations where DU munitions were used in training exercises.

The license, once granted will require the Army to perform specific functions designed to protect public health and safety and the environment. These will include a radiation monitoring program and physical access control consistent with NRC's regulations for protecting the public against radiation.

Several issues and unanswered questions that were raised during the meeting include:

The NRC is reviewing the application and will complete a Safety Evaluation Report. The deadline to request for hearing and comments is October 13, 2009 and has been posted in the Federal Register. Those wishing to view the posting can follow the link below. 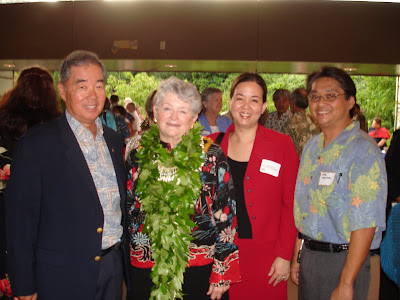 An internationally known researcher and nationally recognized leader in higher education, M.R.C. (promounced "Marcy") Greenwood became the 14th president of the University of Hawaii in August, 2009. She unites a stong belief in the exceptional caliber of the UH system with determination to develop the university's voice as a national leader in higher education.
.
The first woman to serve as UH's chief executive officer, Dr. Greenwood brings experience as both a campus and university system leader. Dr. Greenwood assumes the helm of the University at a difficult time as the UH system faces unprecedented budget cuts, collective bargaining issues, and a growing repair and maintenance back log.

Above from left to right: Senator Norman Sakamoto, Dr. Greenwood, Senator Jill Tokuda and me.
Posted by Mark at 6:59 PM No comments: 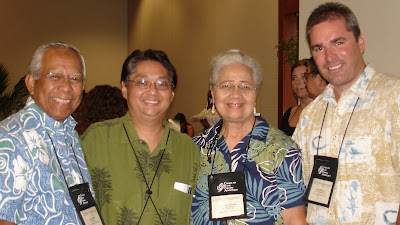 Mark is pictured with Frank Cachola, Lucille Chung and Kawika Burgess from the Trust for Public Lands at the 8th Annual Native Hawaiian Convention.

"Making Our Future Now! E Kia Ano I Mua!" is the theme for this year's Native Hawaiian Convention being held August 25-27, 2009 at the Hawaii Convention Center. The convention hosted by the Council for Native Hawaiian Advancement provides an opportunity to come together, share ideas, celebrate progress, and address challenges.
Mark participated in day three of the convention which featured the Native Hawaiian Policy Center Round table which is designed to provide an opportunity for member organizations and community leaders to dialogue on issues of importance in the Native Hawaiian Community.
The keynote for this session was Big Island native Alapaki Nahale-a, Principal at Ka 'Umeke Ka'eo Immersion Charter School in Keaukaha who spoke of the need for parity in per pupil funding among all of Hawaii's public schools regardless if they are DOE or Public Charter Schools.
Alapaki noted that the Public Charter Schools fill an important niche and create an important competition within the education system. Alapaki noted that "one size does not fit all" and that public charter schools create a choice for parents and students within the community. Alapaki stated that with choice comes responsibility as they are entrusted with public funds and they must be accountable to the tax paying public.
Other 2009-2010 Policy Priorities are contained in documents below: 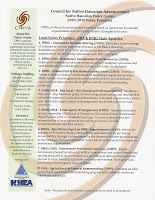 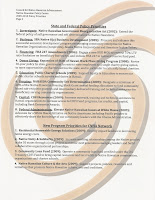 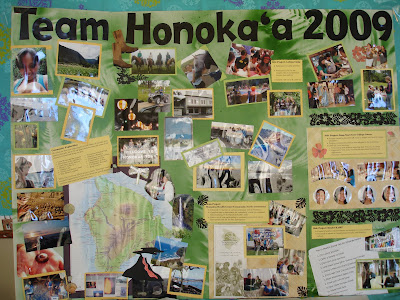 The Hawaii Quentin Burdick Rural Health Interdisciplinary Training Program celebrated it's 10th year anniversary at the University of Hawaii at Manoa. This program provides college students in a variety of disciplines the opportunity to live and work in rural settings. The hope is that this will encourage them to consider working in rural communities following graduation. This program also provides them with valuable contacts that often result in future job opportunities.
The program is open to students from nursing, medicine, social work, public health, psychology, medical technology, nutrition, dental hygiene, education, speech/audiology, and speech communication who become members of interdisciplinary teams that participate in three seminars during the spring semester to familiarize them with the program. The students then participate in a six week summer practicum in one of six rural sites throughout the state.
This year, a group of four college students: Rana Jackson, Melanie Minami, Keri Ferenback, and Christine Marzo came to Honoka'a to work with the Hamakua Health Center on a number of projects including initiating a community needs assessment; participation in the Summer Asthma Camp; providing nutritional information to parents of students participating in Kinder KAMP at Honoka'a, Laupahoehoe and Paauilo Schools; and "Jump Start your College Career" -- a mentoring program providing information to high school students and their parents regarding college applications and financial aid.
In addition to the college students, Honoka'a High School Senior Patti Connors was invited to participate during the practicum with the interdisciplinary teams of health science students thus providing her with the unique hands-on opportunity to learn more about health care careers. 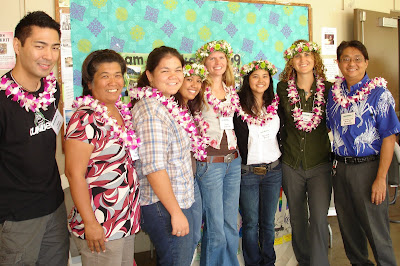 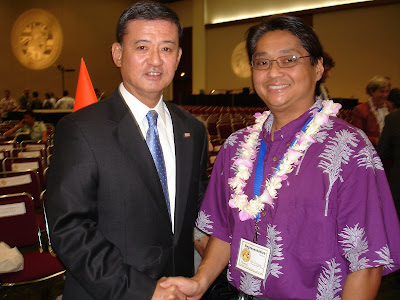 Veterans Administration Secretary Eric Shinseki addressed the Military Relations forum at the 50th Anniversary of Statehood Conference at the Hawaii Convention Center. Secretary Shinseki indicated that the Department of Veterans Affairs is committed to insuring that the estimated 131,000 homeless veteran will be off the streets in the next five years.

"You see, to get to zero, we have to attack the entire cycle of downward spirals that end in homelessness -- the last step in the loss of hope. We can't solve it at the state or national levels, unless we attack jobs and education, health care and substance abuse, depression and suicides and housing."
Toward this end, Secretary Shinseki indicated that the Veterans Administration will spend $3.2 billion next year on homelessness, 85% of which will go toward improving mental health and treating substance abuse.
Posted by Mark at 4:35 PM No comments:

Native Hawaiians: Cultural Navigation in a Sea of Change 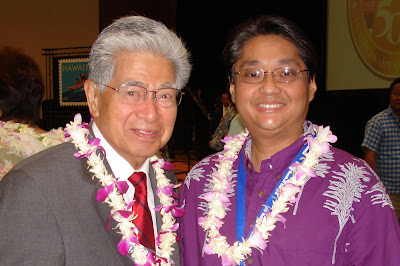 A panel discussion on the Akaka Bill resulted in a variety of opinions ranging from a feeling that something had to be done to protect Native Hawaiian Entitlements to a belief that the 1893 overthrow of the Hawaiian monarchy was illegal and therefore any other action by the United States absent a treaty of annexation would therefore be void. 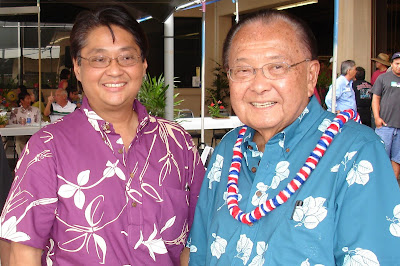 Mark and US Senator Daniel Inouye.
Hawaii Community College held a blessing for the recent expansion of the Machine, Welding and Industrial Mechanics (MWIM) Technology Program at the Mauka Campus. An advisory Council of people from impacted industries and students were instrumental in conducting an industry-wide survey that identified the workforce needs and student needs for the Big Island of Hawaii.

The support of US Senator Daniel Inouye has proven to be invaluable in the continued restructuring of the MWIN Tech Program. The most recent Rural Development Project grant of $315,421 will grow the Refrigeration and Air Conditioning (RAC) option in the MWIM Tech Program. There has been more than $600,000 RDP funds in several grants that have created additional career choices for the students to pursue as well as fulfill the workforce training needed for the Big Island community.

This fall, the MWIM Tech Program is offering 43 credits in 18 different courses with an average class size of 15 students.
Posted by Mark at 12:32 PM No comments: 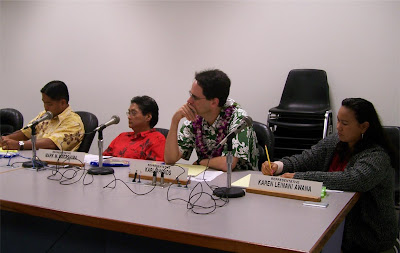 Rep. Henry Aquino, Rep Mark Nakashima, Rep Karl Rhodes and Rep. Karen Awana listen to testimony from Director Clayton Frank and Deputy Director Tommy Johnson.
The House Committee on Public Safety and the Senate Committee on Public Safety and Military Affairs held a joint hearing regarding allegations of Hawaii inmates at the Otter Creek Correctional Center in Kentucky and plans to address these concerns and to insure prevention of future abuse. Most disturbing to committee members is that sexual assault is only a misdemeanor offense in Kentucky and the one case that has been prosecuted will result in a year or less in jail time for the perpetrator.

Public Safety Director Clayton Frank did inform the Committees that the majority of the female prisoner would be returned to Hawaii and will be housed at the Women's Correctional Facility and the Federal Detention Center. The Department of Corrections remains intent on closing the Kulani Correctional Facility in spite of growing opposition and reasons for maintaining this program as an essential part of the rehabilitation of inmates.
Posted by Mark at 3:30 PM No comments: 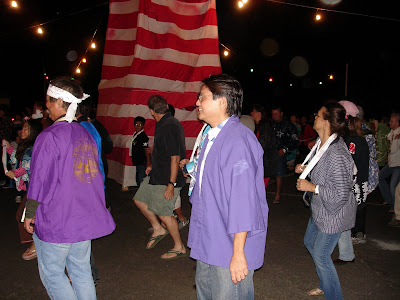 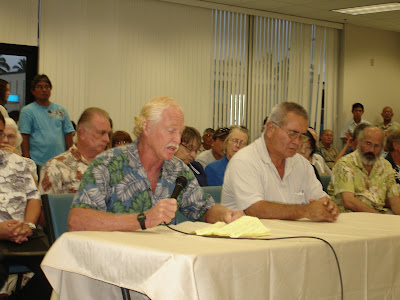 A standing room crowd filled the Hawaii County Civil Service conference room to testify before the Senate Ad Hoc Committee chaired by Senator Russel Kokubun regarding proposed closure of Kulani Correctional Facility and the layoff of 14 of the 15 state agricultural inspectors on the island. The Senators invited myself and other members of the House to join then at the table.
Posted by Mark at 12:55 PM No comments: 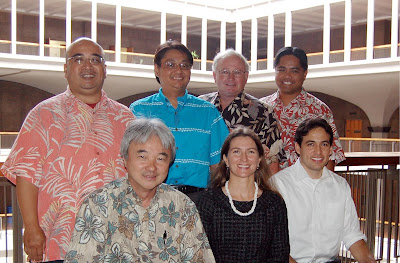 Mark joined his fellow first-year legislators today in a meeting to map out plans and issues they would like to work on in the coming legislative session. Energy, education and revisiting the gaming tax credit were among the topics of discussion. 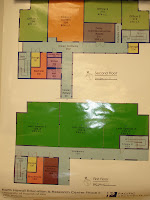 The North Hawaii Education and Research Center Advisory Committee met to receive a report on the on-going program and actives at the center. Adult and Pediatric CPR, Hawaiian Quilting, Japanese Conversation and Hiking Hamakua are among the non-credit offerings in the coming months. Check these and other for-credit offerings at www.hilo.hawaii.edu/academics/nherc/

In a capital improvement update, Director Farrah-Marie Gomes reported that bidding has already begun on Phase 2-B which comprises the enclosure and completion of the first floor of the Phase 2 building. Bids are scheduled to be opened at the end of August and construction is expected to last for 12-15 months.

Once completed, the project will house a heritage center and a one-stop elder care services.
Posted by Mark at 9:46 PM No comments: 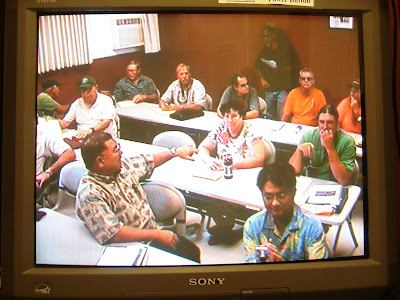 Mark participated in a teleconference discussion of the Hamakua Ditch working group held at NHERC. The group has been meeting for a number of years to address concerns regarding the continued availability and service of water from the Hamakua Ditch..

Waipio Stream. Jim Cain reported on success in clearing the mouth of Waipio Stream to allow for water to flow freely into the ocean. State Civil Defense chief Ed Texeira coordinated the efforts of numerous state, federal and county agencies worked together to expidite the numerous permits and clearances necessary to allow the project to move forward in a timely manner. The work was completed by Royal Construction who donated the equipment and operator to complete the work. The State Civil Defense Office has opened discussions with US Senator Daniel Inouye's Office to see if additional money can be secured for additional stream maintenance work.

Hamakua Ditch. The $4 million ditch mitigation project is currently on hold as the Department of Agriculture has identified three property owners who have not signed on to the plan to retro-fit the Hamakua Ditch with a buried pipeline to prevent future debris from interferring with the water flow. There will be several efforts underway to attempt to resolve the conflict with the land owners while also continuing to investigate other legal avenues.

Fire Prevention. The group also agreed to pursue the necessary legal and logistical means to allow the Hawaii County Fire Department to draw water from the Hamakua Ditch for fire fighting purposes should the need arise in the Kukuihaele area.
Posted by Mark at 9:17 PM No comments: 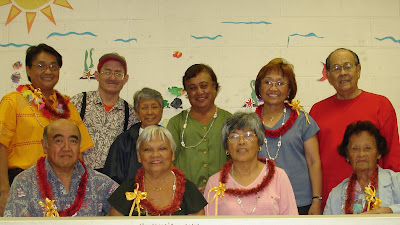 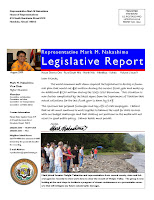 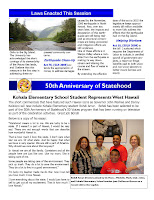 If you have not recieved a copy of my legislative wrap-up, please email me at nakashima08@hawaii.rr.com and we will be sure to get one to you.
Posted by Mark at 4:46 PM No comments: 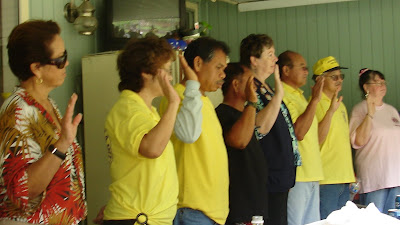 President Terry Baxter and her Officers and Board of Directors were installed in a ceremony held at Everett Souza's residence. This is a milestone year for the Hamakua Lions who is celebrating their 75th anniversary and is the fourth oldest club in Hawaii. 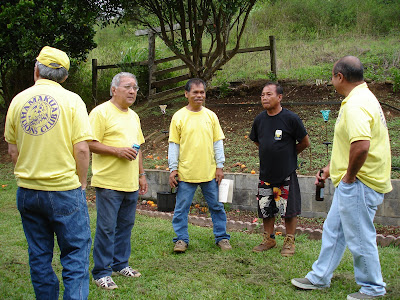