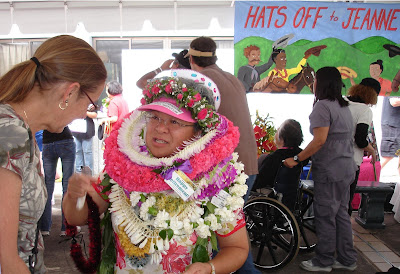 Jeanne Abe, Hale Ho'ola Hamakua’s Director of Nursing, was the guest of honor at a "surprise" retirement celebration held for her. Jeanne's career spanned 43 years as a nurse, including 39 years in public health for the state on Oahu, Maui and the Big Island.

As Interim Director of Hale Ho'ola, Jeanne oversaw patient care for residents after the facility sustained considerable damage from the 2006 earthquake that required all patients to be evacuated from the facility. In December 2009, HHH’s expansion began and was completed in May 2010, bringing the total number of beds in the facility from 50 up to 77. The expansion wing is scheduled for occupancy in July 2010.
Jeanne is also responsible for much of the community outreach that has created a cadre of volunteers and supporters for Hale Ho'ola Hamakua. She earned a Bachelors of Science in Nursing and Masters Degree in Public health from University of Hawaii at Manoa. She first started as a staff nurse at Kapiolani Women and Children’s Hospital on Oahu in 1967. She continued her nursing career on Maui for 30 years.
In 2002, she became HHH’s Director of Nursing for Hale Hoola Hamakua and served as Interim Administrator from February 2007 through October 2009 before returning to her post.
I'm sure that retirement for Jeanne will only free up more time for her to do good things in the community. 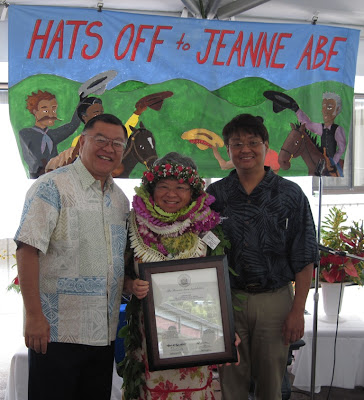